‘Bamboozled’ is the Forgotten Gem in Spike Lee’s Career


It still shocks you. No matter how many times you’ve seen those images, in history books and documentaries, museum exhibits and memorabilia collections, banned cartoons and the occasional old movie preserved on TCM (and preceded by a warning), the actual witnessing of it still stops you in your tracks. You don’t have to know that people would place corks in a small metal bowl, pour alcohol on them, light them on fire, mash the ashes and add water. (Later, a performer might have used standard shoe polish, but this was the traditional method.) You don’t even have to observe them methodically apply that concoction to their foreheads, cheeks, nose, chin, jawline, or complement the look with red lipstick. You just have to see the result — the actual look of blackface on someone — to feel shaken. And this time, it’s not in faded black and white but in living 21st-century color, staring right back at you.

Spike Lee knows the historical import of these images. He understands the power of cinema, and the necessity of provocation, and how sometimes a blunt instrument is required in lieu of a sharp blade. He’s aware of how the minstrel show had been used to dehumanize people, to reduce them and belittle them, and how so much of that legacy continued even after that mode of entertainment became a thing of the “distant past.” Bamboozled, his 2000 satire — Lee has his lead character read the definition of the word “satire” to the audience in the opening sequence, just to silence any doubters — talks much trash and throws a lot of caricaturish, over-the-top stuff at you in its first act. Some of it inspires eye-rolling, as obvious targets get pincushioned. Other bits have you laughing despite your better angels and instincts.

Then it arrives at the moment when two actors have to “blacken up.” The film follows each step. This scene will repeat itself throughout the film three times, all of them set to Terence Blanchard’s musical lament. During the third go-round, you can see tears rolling down one of the man’s cheeks. Each time they finish the ritual, mugging desperately into the camera as they bound onto a TV studio’s stage, made up to look like the previous 50 years never happened, you get the wind knocked out of you. That’s the point. Lee has made something that could be considered a comedy. But he’s not playing around.

Nestled in between his highly successful concert movie of the highly successful comedy tour The Original Kings of Comedy and his stunning post-9/11 parable 25th Hour, Bamboozled has been consigned to being an odd blip on his filmography. Audiences were baffled. Critics were bent out of shape over it. The movie was considered too on-brand to be an outlier but too scattershot to be a masterpiece, too broad, too sour, too black, too strong. Now that the Criterion Collection has just released a new DVD/Blu-ray edition of this long out-of-print title, it’s easier to recognize this cri de coeur for what it is: a history lesson on decades of screen (mis)representation, a look back in anger but also profound sorrow, a flawed and sometimes flailing takedown that becomes more effective the more times you see it. At the turn of the century, it seemed like an crude attempt at sketch comedy. Twenty years later, the movie feels like a forgotten gem in Spike’s career, one who’s spit-polish and reappraisal comes at the exact right moment. 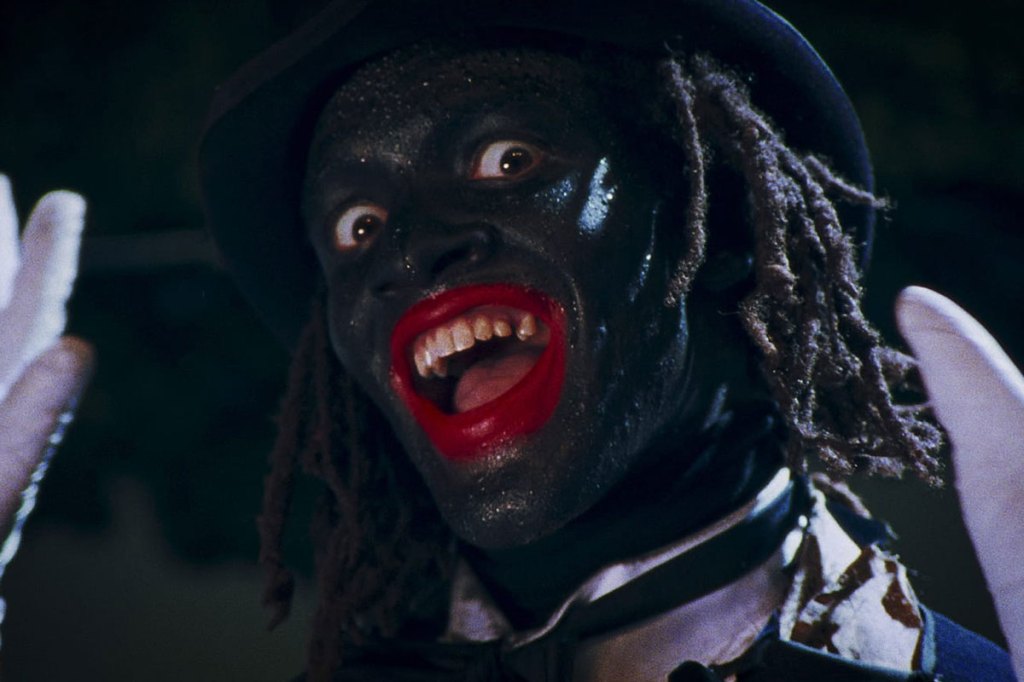 Bamboozled‘s premise is the most modest of proposals: TV producer Pierre Delacroix (Damon Wayans) wants to make shows about average, middle-class African-American families. His white boss (Michael Rappaport), who claims to know more about black culture then the man sitting in front of him, wants more “hip” and outrageous programming. So, in an effort to get fired, Delacroix and his assistant Sloan Hopkins (Jada Pinkett Smith) suggest The New Millennium Minstrel Show. It’s exactly what it sounds like: an update of an old-fashioned 19th-century variety show full of songs, dances, skits and corrosive stereotypes. He hires two street performers, Manray and Womack (tap-dancing phenom Savion Glover and In Living Color‘s Tommy Davidson), to play “Mantan” and his sidekick “Sleep ‘n’ Eat.” The exec suggests they set it on a plantation; Delacroix offers the idea of a watermelon patch instead. They produce a pilot that makes those old Amos & Andy episodes look like Joe Turner’s Come and Gone. Delacroix believes that something this blatantly offensive is destined to get him canned. Naturally, the network gives him a 12-episode order. The nation gives him a hit show.

It’s a tale as old as time, or at least The Producers. Mel Brooks’ farce is a simply a high point in “sick” humor, however, and an expansion on the notion that comedy is tragedy plus time divided by bad taste, a wink and massive cajones. Bamboozled has other things on its troubled mind, namely the use of entertainment as a propaganda tool and a prejudice machine. On the Criterion edition’s supplementary disc, there’s a conversation between Lee and critic/programmer Ashley Clark (whose book Facing Blackness is a brilliant forensic dissection of the film) in which the director admits that prior to the project’s conception, he’d been thinking a lot about two then-recent birthdays: the centennial of the movies and the 50th anniversary of television. These were mediums he dearly loved, and that showed him the world. They also reflected back a purposefully one-sided, less-than-one-dimensional view of the African-American experience. Many filmmakers launched counterattacks by the late ’90s — not just Lee, but also Charles Burnett, Julie Dash, Melvin Van Peebles, John Singleton, Kasi Lemmons, Gordon Parks, Ivan Dixon, Kathleen Collins, Marlon Riggs, and a growing list of others.

Yet for every Losing Ground, there was decades of lost ground via endlessly recycled images of buffoons and simpletons. There was also the Seventies sitcoms like Good Times and The Jeffersons, which — assuming Bamboozled‘s skeptical view of them was reflective of its creator’s mindset — Lee also saw as harmful. Minstrelsy was gone, but what lay at the roots of those shows wasn’t dead. It had just changed its makeup. Still, what would happen if someone really tried to resurrect those old vaudeville-style, pre-Civil War to Jim Crow era shows and sell them as ready-for-primetime programming? For Delacroix, it was a way out of a bankrupt creative situation, with the delusional notion of it being a subversive way to smuggle social commentary in. For Sloan, it’s a way to prove to her militant brother (Yasiin “Mos Def” Bey) that she’s not a corporate sellout. For the two New Millennium actors, who view TV as a level-up from tap-dancing in midtown for chump change, it’s a way to “keep the income coming in.” Everyone ends up losing a piece of their soul regardless of their motivations.

Delacroix gets checkmated because he inadvertently gives the people exactly what they want — a little bit of that “Make America Great Again” throwback mockery. (Dig how the movie’s crude look, courtesy of a consumer DV camera, switches to Super 16mm lushness during these sequences. It’s like gazing a beautiful, poisonous flower.) Soon, the studio audience is showing up in blackface, with everyone pledging allegiance to a racial epithet. Pierre ends up surrounded by kitsch racist-memorabilia, a piggy bank taunting him by throwing endless phantom coins into its mouth. Sloan and the show’s stars end up broken. Like Network, one of several movies which Bamboozled owes a partial debt to, the narrative ends with a plea to yell that you’re not going to take it anymore, and a death. Delacroix’s experiment has spectacularly backfired. So had Spike’s, for the opposite reason: He’d given folks something they really didn’t want in 2000, i.e. to have their face rubbed in a centuries’ worth of hate.

There’s a lot going on in Bamboozled that isn’t a direct poke in your eye, of course. There’s Wayans’ Harvard-affected, every-syllable-has-its-day accent, which is the perfect aural equivalent of his name. There are the arguments between Smith, who’s genuinely wonderful in the movie, and Bey about ideology. There is Bey’s group the Mau-Mau’s, Spike’s scorched-earth take on revolution-spouting, consciousness-raising hip-hop groups and the one thing even the film’s fans have a hard time with. There’s Paul Mooney as Junebug, Pierre’s dad and a comedian who’s admirably stuck to his well-honed club shtick; in a perfect world, the movie would’ve helped reintroduce this legendary stand-up and Richard Pryor collaborator to a larger audience. (Chappelle’s Show would accomplish that a few years later.) And there’s the commercial parodies, from “Bomb Malt Liquor” to a deathblow critique of Tommy Hilfiger’s marketing to the African-American community.

But the underlying feelings that inform the movie are rage and pain. That’s what you see in Delacroix’s eyes when his boss brusquely uses slurs and ill-advised slang to prove the he’s more “down,” and when the producer says that he refuses to keep pumping out shit “like Homeboys in Outer Space” — a hilarious throwaway line until you remember this was a real, honest-to-God series. You see it in his face when white coworkers excitedly praise him and he watches white people cracking up at the performers denigrating themselves for their delight. (It’s hard to watch these scenes and not think of Dave Chappelle’s story about seeing a Caucasian crew member laugh a little too intensely at a sketch, a moment that forced the comedian to pull the plug on his own show.) And you definitely see it in Bamboozled‘s coup de grace, a climactic roll call of racist screen imagery throughout the ages that presents you with a century’s worth of humiliation 24 frames per second.

This is the history the film wants to remind you of; this is the history it wants you to reckon with. And seeing the movie through the lens of our current moment, history has indeed been kind — agonizingly so — to what Bamboozled is talking about. That so many people have inherently picked up what Lee was putting down and used that as a sort of template for what writer/critic Evan Narcisse called “the New Black Absurdity” has helped its mode of attack feel remarkably familiar,. You can see its legacy in everything from the cinema du Afro-punk to Atlanta, Terence Nance’s unclassifiable surreality to Sorry to Bother You. Even Spike himself would go back to this bitter aesthetic well with BlacKkKlansman.

It’s plus ça change perversity of it all — the constant sheer WTF-edness and creeping feeling of progress being undone by violence and oppression — re: life circa 2020 that really makes Bamboozled feel like it was made for here and now. It’s time has come, wonderfully and regrettably. Reached by phone a few days after the DVD’s release, Clark noted that “in 2000, when this film came out, it was: ‘Spike, we know blackface is bad, get over it.’ If this had come out in 2008, it would have been received even worse: ‘Spike, we live in post-racial America now, you’re so out of touch.’ Right now, we have a President tweeting out miracle cures, people like Sheriff David A. Clarke considered to be pundits and the Diamond and Silk appearing on Fox. The really scary thing is that, 20 years on, Bamboozled feels incredibly contemporary. It doesn’t look so extreme after all…and when you consider the content of this film, that’s a very troubling thing.”

‘Notturno’ Is Not Journalism, But Gianfranco Rosi’s Movie Investigates the Heart of the Middle East

Gianfranco Rosi’s Notturno (“Nocturne”) was filmed over the...

‘In & Of Itself’ Review: Derek DelGaudio Uses Your Illusions

‘Our Friend’ Review: Tragedy, Tears and a Testament to One Saintly BFF

In ‘White Tiger,’ Lessons Are Learned (and Relearned) About India’s Class System