Christian Siriano Brings NYFW to Connecticut For The Day

By newadmin / Published on Saturday, 19 Sep 2020 11:00 AM / Comments Off on Christian Siriano Brings NYFW to Connecticut For The Day / 9 views


Editors (and Billy Porter!) ventured to the Connecticut home of Christian Siriano yesterday to check out the designer’s live and socially distant Spring 2021 runway show in his sprawling backyard. The designer sent Lyfts so guests could get to the show, allowing us all to arrive at his home about an hour before showtime. On hand upon arrival were face masks—made by Siriano himself—and small bottles of germ-X hand sanitizer. 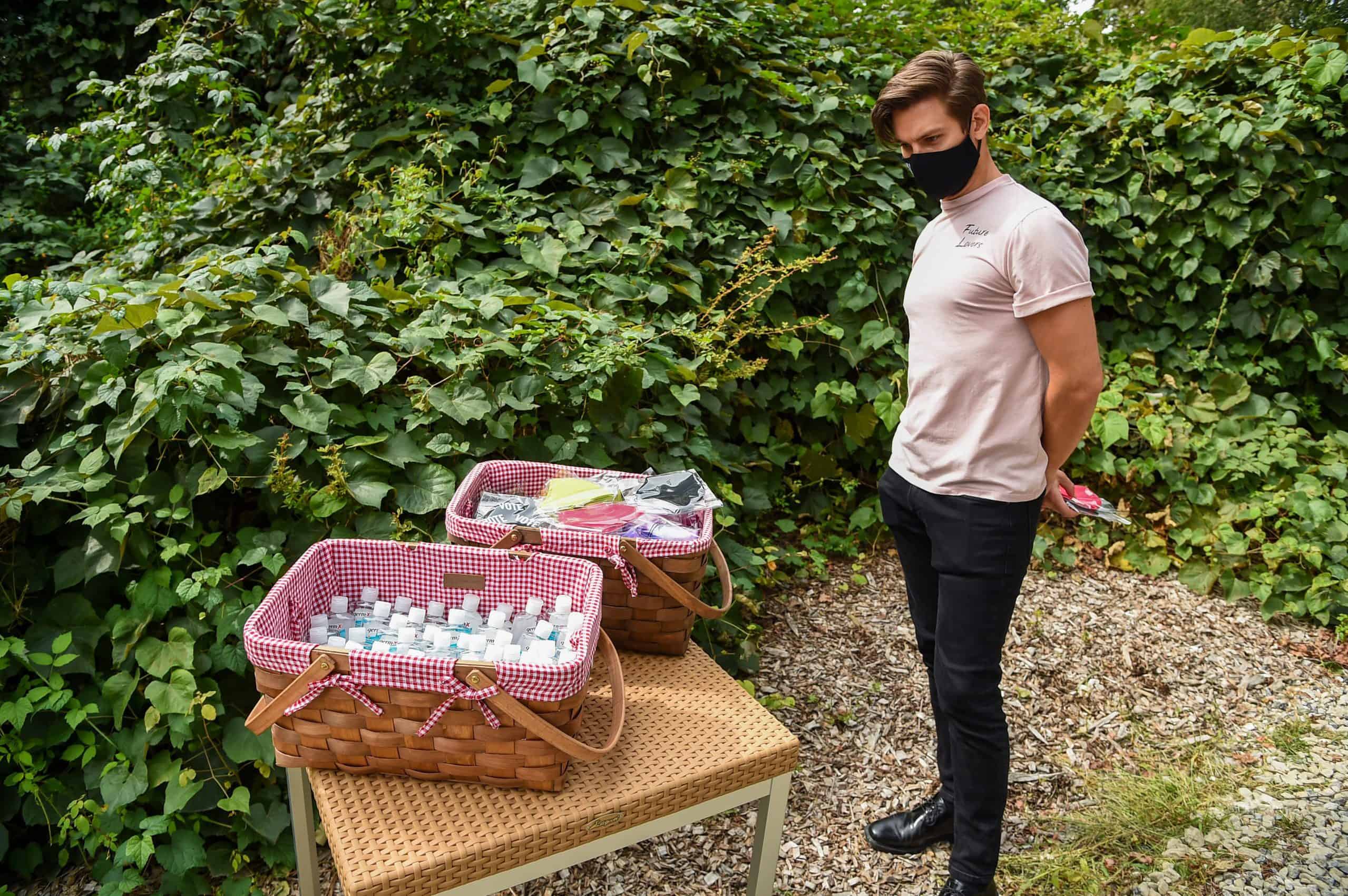 With such few events happening during New York Fashion Week, this one welcomed about 80 guests (more than double the audience of Jason Wu’s show on Sunday) and saw familiar front row regulars such as Vanessa Friedman, Mickey Boardman, Adam Glassman, Robin Givhan, Faran Krentcil, Aya Kanai, Alexandra Mondalek, and Tyler McCall. Krentcil had an astute observation that we were all technically still working from home. Albeit Christian Siriano’s home! 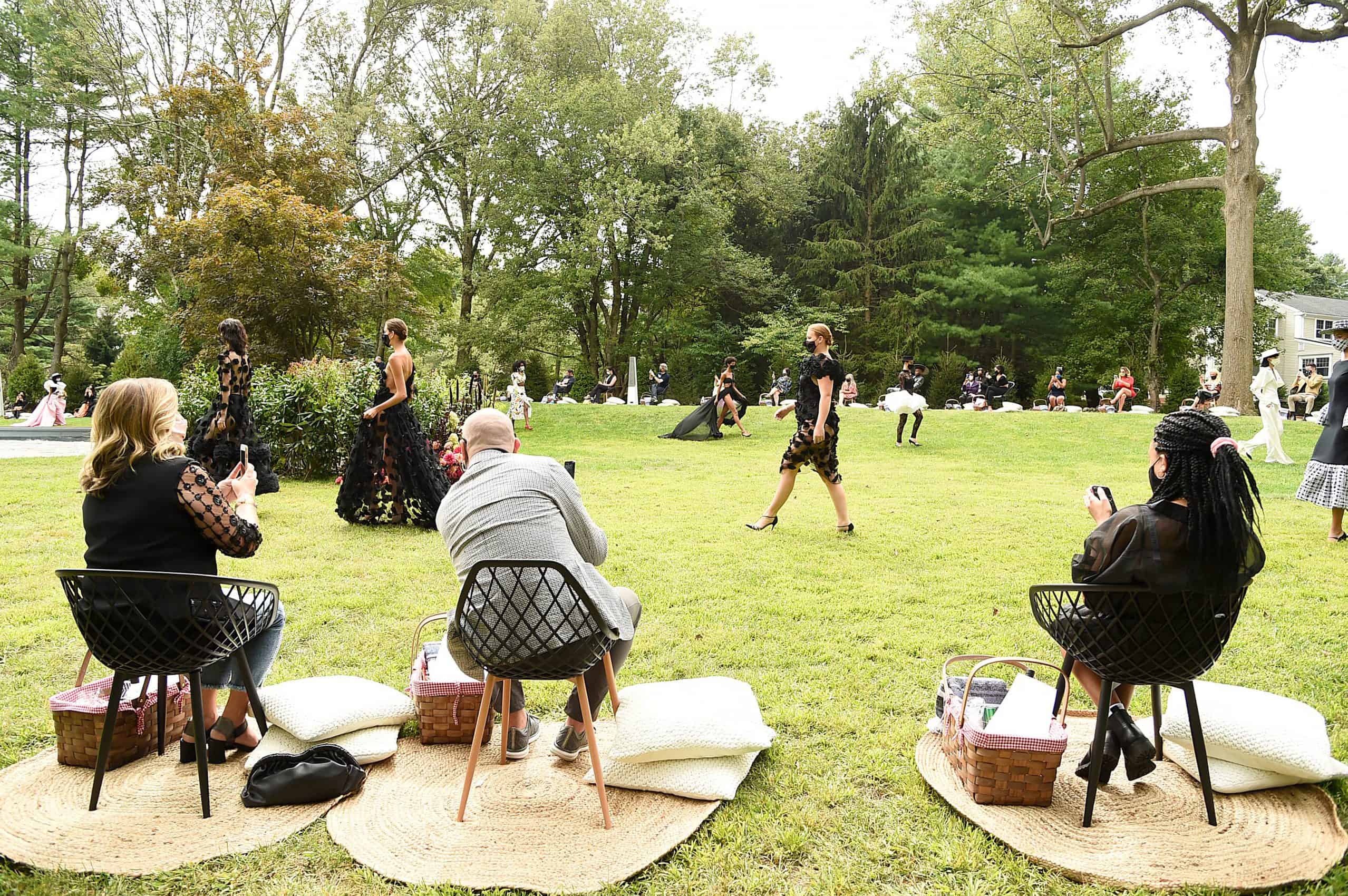 Models walked in masks matching their gowns across a bridge over Siriano’s pool and then across his lawn. Notably, Sarah Jessica Parker’s shoe line provided the heels (!!!) for the show. His Collection 37 was inspired by things he discovered while quarantining at home. “I took ideas from films I loved as child like Troop Beverly Hills, Don’t Tell Mom The Babysitter’s Dead, Clueless, and even The Wizard of Oz,” Siriano says. “Fabrics, shapes, and silhouettes from each film are referenced in the collection, but in a new modern way for our customer. I also started cooking more as I was home and I fell in love with really ripe heirloom red tomatoes picked from the local farmers stand in Connecticut. They inspired a rich saturation of color and texture used throughout the collection.” 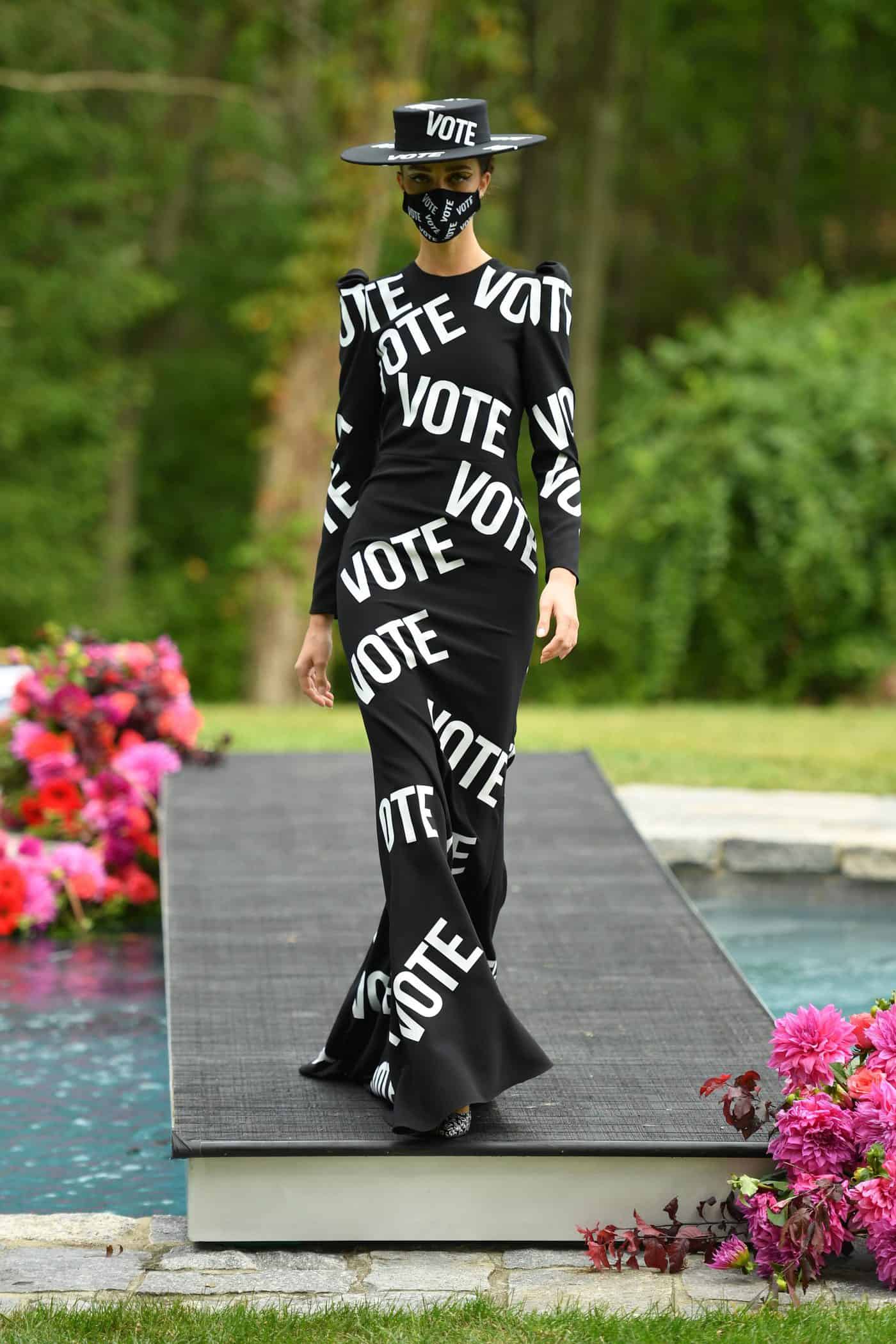 Siriano’s romantic Spring 2021 collection is for a time we hope to see again in the not-too-distant future. His parade of gowns included one with VOTE written all over it, a princess pink frock, and a few plaid numbers that are likely his nod to Clueless. This was the opposite of WFH looks and we were here for it. Coco Rocha, who is seven months pregnant, closed the show in a red turtleneck top attached to a trailing taffeta flounce. Not one to let a viral runway moment escape her, she even ended up getting into the pool. Rocha went under water for a few minutes (why not really go for it!) and had some difficulty getting out of the pool due to the weight of the wet gown. She eventually called over model Don Hood to help her get out. She told me after the show that swimming with a mask on also proved to be difficult. But bravo for trying in the name of fashion! 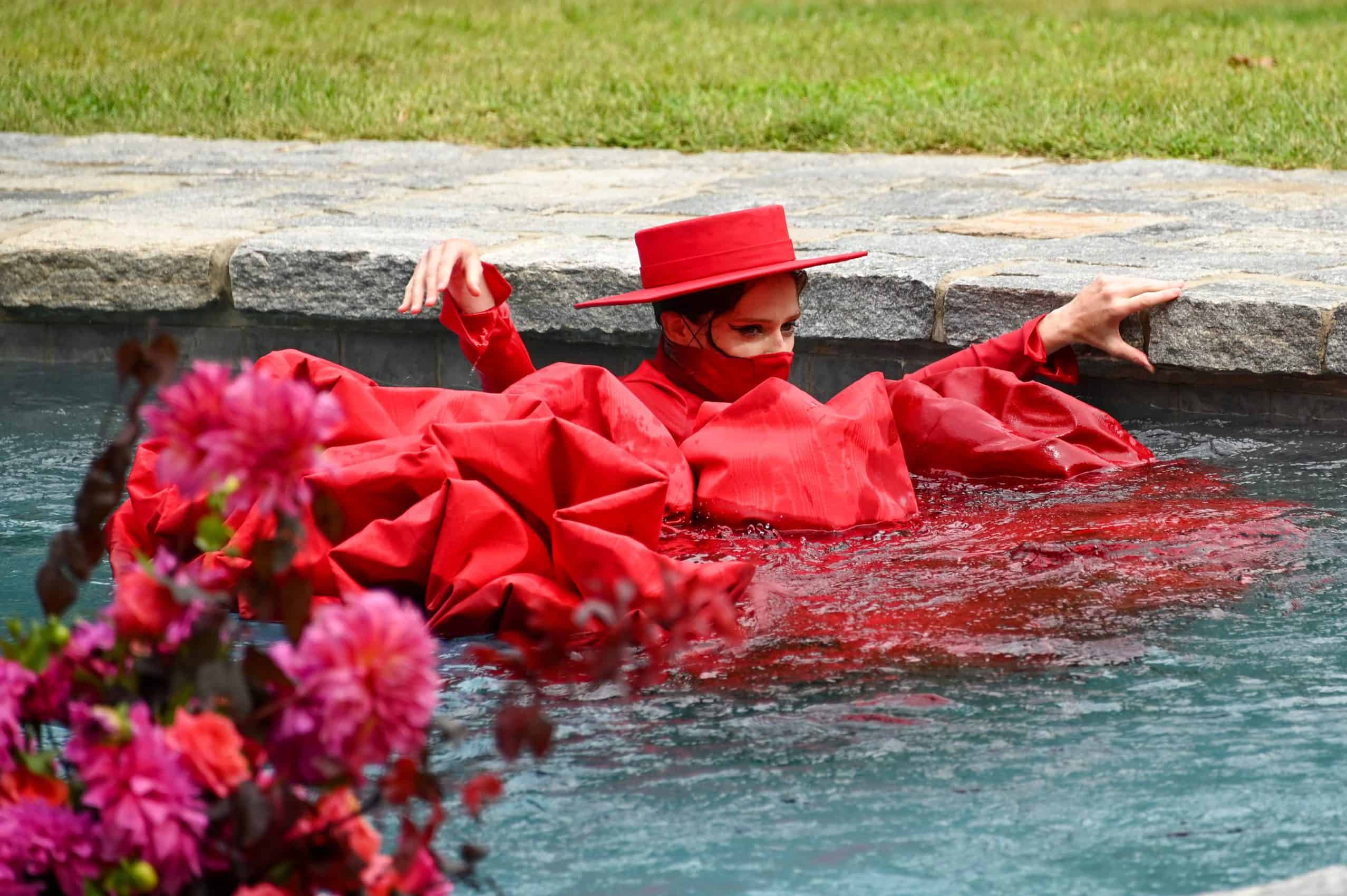 Everyone in attendance went home with a picnic basket full of goodies such as a blanket, tea sandwiches, sushi, potato chips, and a bottle of Out East rosé. The show wrapped up the weirdest fashion week in history with a smile. 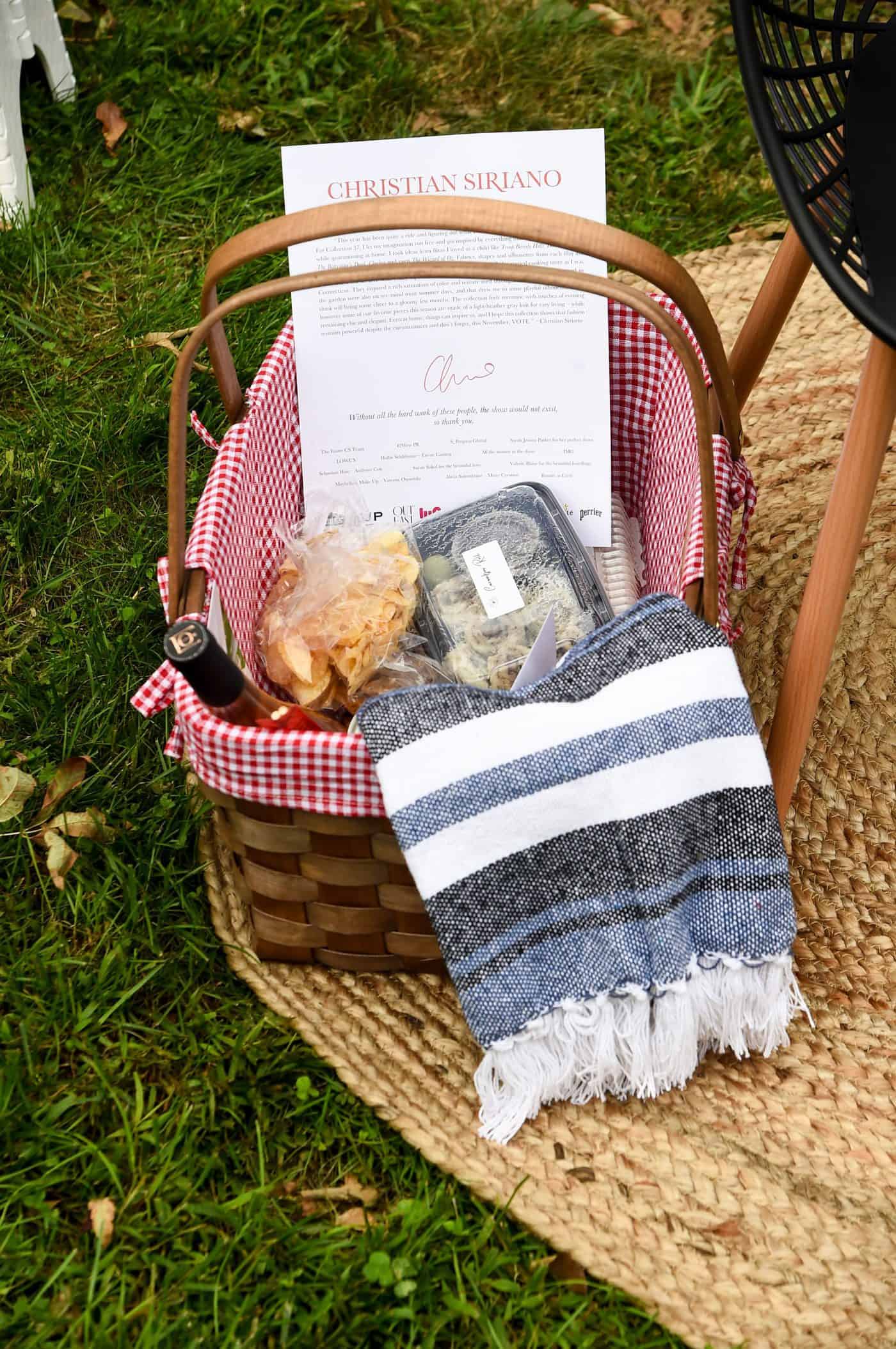 WESTPORT, CONNECTICUT – SEPTEMBER 17: A view of the gift bag during the Christian Siriano Collection 37 2020 Fashion Show on September 17, 2020 in Westport, Connecticut. (Photo by Jamie McCarthy/Getty Images for Christian Siriano)

See the collection below: