Nearly eight years after her death, Karen Black has left multiple footprints on the culture. Thanks to roles in Easy Rider, Five Easy Pieces and Nashville, she’s remembered as part of the New Hollywood film movement of the Seventies. Her ground-breaking role as a transgender woman in Robert Altman’s Come Back to the 5 & Dime, Jimmy Dean, Jimmy Dean cemented her long-running stature as a gay-culture icon. Thanks to cult films both hokey (Airport ’75) and horrorifying (Trilogy of Terror), she’s something of a camp hero. And who can forget  the Nineties punk/shock band, the Voluptuous Horror of Karen Black, named in her honor?

But a new project posits another side of Black: Was she also the forgotten sad-folk chanteuse of the Seventies?

That’s the premise of Dreaming of You (1971-1976), a collection of never-released recordings that Black left behind after her cancer-related death in 2013 at age 74. On its 15 vintage songs, along with two tracks recorded just over a decade ago with indie singer-songwriter Cass McCombs, Black is not the intense, deliciously over-the-top screen diva of yore. Instead, she’s a dreamy, languid troubadour who sings lazy-day country pop (“Thank God You’re Mine”), Laurel Canyon pop (“Sunshine of Our Days”) or folk ballads worthy of Joan Baez (“Well I Know You’re Lonely Now”). Other songs suggest the swooping soprano and preciousness of early Joni Mitchell (“The Wind Doesn’t Speak to Me Anymore”) or a distaff version of snippy mid-Sixties Dylan (“You’re Not in My Plans”). Some of it, like the goth-folk “It All Turned Out the Way I Planned,” makes Black sound like a precursor to modern rainy-day troubadours like Phoebe Bridgers.

“She loved singing and would express herself singing,” says her husband, director Stephen Eckelberry. “If we got into a fight or something, she would start singing [Dean Martin’s] ‘I Don’t Think You Love Me Anymore,’ but in a humorous way.”

Like those who’d followed her career, Eckelberry, who met and married Black in the Eighties, was aware of the way in which music infiltrated her work. She and co-star Kris Kristofferson sang an impromptu duet in 1972’s Cisco Pike, about a down-on-his-luck musician. In an interview at the time, she mentioned she was cutting an album of what she called “soft rock” songs, including covers of songs by Kristofferson and the Beatles. Two of her own tunes (including “It All Turned Out the Way I Planned It”) found their way onto the soundtrack of the way-underground 1973 occult-horror film The Pyx.

For her role as country queen Connie White in Nashville, Black sang two of her own honky-tonk tunes, “Rolling Stone” and “Memphis.” “I’m a movie nerd and worked at movie theaters and in video stores,” says McCombs. “And as any Karen Black fan knows, there are little clues in all her films that she likes to sing. In Five Easy Pieces, she sings in that scene in the car. One way or another, she’ll sing.” In the mid-Seventies, Black also performed one of her songs on Dolly Parton’s short-lived Dolly variety series as well as on Saturday Night Live, which she hosted in 1976.

Black made some further recordings in the late Seventies with producer David Campbell (Beck’s dad) and Dylan collaborators Steven Soles and David Mansfield, including a cover of the Everly Brothers hit “All I Have to Do Is Dream.” But soon after, the style of L.A. folk-pop that Black loved became yesterday’s denim jackets, and her recording career sputtered out. From what Eckelberry has been able to determine, Black wasn’t particularly encouraged to pursue a side career in music. “She was just becoming hot [in movies], and her agents wouldn’t allow her to do a full album in the midst of a full career, which make sense,” he says. “You don’t take time off to make an album.”

Black intermittently showcased her vocal chops: In the late Nineties, she hooked up with L7 for a punk-metal version of the old Sonny and Cher hit “Bang Bang” and put together a one-woman show, My Life for a Song. Onstage, she was also known to cover songs by Dylan (“Like a Rolling Stone”) and David Bowie (“Time”). Shortly before her death, Black cut a cover of singer-songwriter Tracy Stark’s “Greatest Nightmare” (produced by solo artist and Bongos frontman Richard Barone) for a Stark collection. But her focus shifted more to acting gigs during that time. “She had an odd relationship with singing,” Eckelberry says. “If she landed a job, she would show up on a movie set the next morning. But if she had a singing gig, she would say, ‘I have to rehearse.’ She was more timid. She wanted to be perfect.” 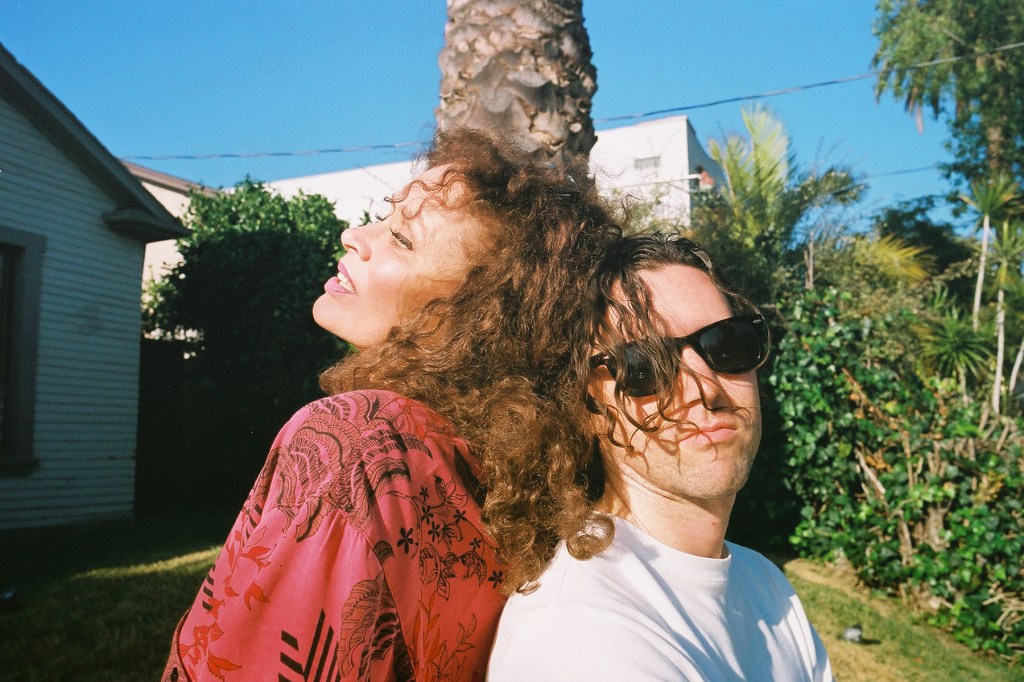 In the late 2000s, she and Combs met through a mutual friend and began collaborating with an eye toward an album, but Black’s death halted those plans. At her memorial, McCombs played live to a tape of Black singing one of those collaborators, “Brighter.” Although Eckelberry calls it “an eerie performance,” he was nonetheless prompted to search for any additional recordings to accompany the tracks Black had been working on with McCombs.

In a storage space in Los Angeles, where Black had stashed boxes of memorabilia in the early Eighties, Eckelberry uncovered several boxes of randomly marked tapes from the Seventies. With McCombs on board, the arduous process of sifting through the tapes began. One box, tantalizingly marked “Karen Black and Randy Newman,” contained no actual tape inside but suggests a long-lost collaboration. But once the reels were salvaged and digitized, they revealed recordings of Black rehearsing roles for her movies — and singing her own music. “We started hearing songs, and we got excited,” McCombs says. “We said, ‘Oh, there is music — keep digging.’ It fueled us to keep searching.”

Eckelberry never recalls his late wife even mentioning the existence of any of those recordings. “I don’t think she even knew she had them,” he says. “Karen lived in the moment. Someone may have just handed them to her and she didn’t know. She didn’t talk about the tapes.” But once he heard the recordings, Eckelberry realized what they had. “It was completely familiar,” he says. “I was like, ‘Yeah, it sounds like Karen.’”

Piecing together the fragments of information on the boxes as well as conversations with Black’s former manager Peter Rachtman, Eckelberry and McCombs began filling in the blanks. Black apparently did record a few songs in a few days in Nashville in 1971 with producer Elliot Mazer, known for his work with Neil Young (the two cut Harvest during the same time). Five years later, on the heels of Nashville’s success, Black took another stab at cutting her material, this time with producer Bones Howe (who worked with everyone from Elvis Presley and the Fifth Dimension to Tom Waits). No one’s sure if she ever had an actual record contract (although Elektra/Asylum, home to the Eagles, Linda Ronstadt and others, was said to be in the running), and Eckelberry says she never mentioned anything about all of this — only that she had a crush on Mazer.

Dreaming of You includes an unplugged remake of the Moody Blues’ “Question,” but another cover, of Paul McCartney’s “Junk,” was only released on social media and is not included on the album. “We wanted to make this album about her voice and her songwriting, so we only included one cover,” says McCombs. “She was a pretty incredible songwriter. Maybe because she was trying to find her voice, every song seems in a completely different style, which I really admire.” Two duets with McCombs, “Royal Jelly” and “I Wish I Knew The Man I Thought You Were,” were also included.

Eckelberry says his late wife, who supported gay rights, was well aware of her stature in the LGBTQ world. “I think it’s because she seemed like a diva, even though she wasn’t one,” he says. “She was so expressive. There was nothing low key about her acting. It was never underplayed. She was also kind of a tragic figure, like, ‘Why the hell didn’t she fulfill the promise of her talent and continue doing good movies?’” Fans of Trilogy of Terror — especially the final part, in which Black combats a miniature aboriginal doll who eventually inhabits her — will be bummed to learn that Black wasn’t especially fond of that project. “She didn’t want to do it and often wished she hadn’t,” Eckelberry says. “She felt like she became known as a horror actress.”

But Eckelberry says Black was genuinely proud of her role as Joanne, a man who has a sex-change operation to become a woman, in Come Back to the 5 & Dime, Jimmy Dean, Jimmy Dean. “She told me it was one of the most painful things she ever did,” says Eckelberry. “Very difficult. She was a very feminine person and had to become a man who became a woman. She spent  a month with a guy who was transgender to research. It was a lot of work.”

Black’s stillborn music career is proving even more alluring than any renewed appreciation of her big-screen life. “It’s an amazing mystery,” Eckelberry says. “What if Karen had dedicated herself to her singing career? I wonder what would have happened.” At the very least, McCombs feels that Dreaming of You presents a form of closure. “She wanted to make a record, and although we didn’t end up making the record we had talked about, I wanted to follow through with that idea,” he says. “And I think we got there.”

A stand-up and a singer embark on a whirlwind, musical romance...

Addison Rae Stars in Reimagined ‘He’s All That’: Watch the Trailer

Netflix has shared the first trailer for He’s...

‘Stillwater’ Examines Lives in Wreckage, With Matt Damon at the Center

Matt Damon’s new movie, Stillwater, opens by building up to...

In Birds of Prey, Mary Elizabeth Winstead played Huntress (a.k.a. the...