By newadmin / Published on Wednesday, 25 Sep 2019 06:32 AM / Comments Off on Meet the Man Helping Valentino and Iris van Herpen Design for the Ballet / 72 views


Eight years ago the New York City Ballet went high fashion. The NYCB’s board vice chair, Sarah Jessica Parker, came up with a plan to get notable designers to craft costumes for the shows. The result was the Fall Fashion Gala, a popular program that runs every September, bridging the runway with the world of dance.  Now, fans have a chance to see the looks up close. Intersect by Lexus has launched Design in Motion: A New York City Ballet Fall Fashion Gala Retrospective, an exhibit of costumes from the shows. “We’re very excited that this is really the first time to have this collection together all at once,” says Corey Proffitt, communications manager at Lexus. “One of our goals here in the city as a brand space is really to bring cultural experiences to the city and I think we’ve certainly succeeded with this one.”

But the exhibit isn’t just a highlights reel of designer costumes (although names like Valentino, Virgil Abloh, and Alberta Ferretti are sure to attract visitors). It is also a chance for people to appreciate the work of the NYCB’s Costume Shop, which brings the couturier’s ideas to life. Marc Happel, the NYCB’s director of costumes, works closely with the designers to translate their visions to the stage. He gave a private tour of the exhibit to The Daily, and discussed what it has been like to work on the gala since its inception. 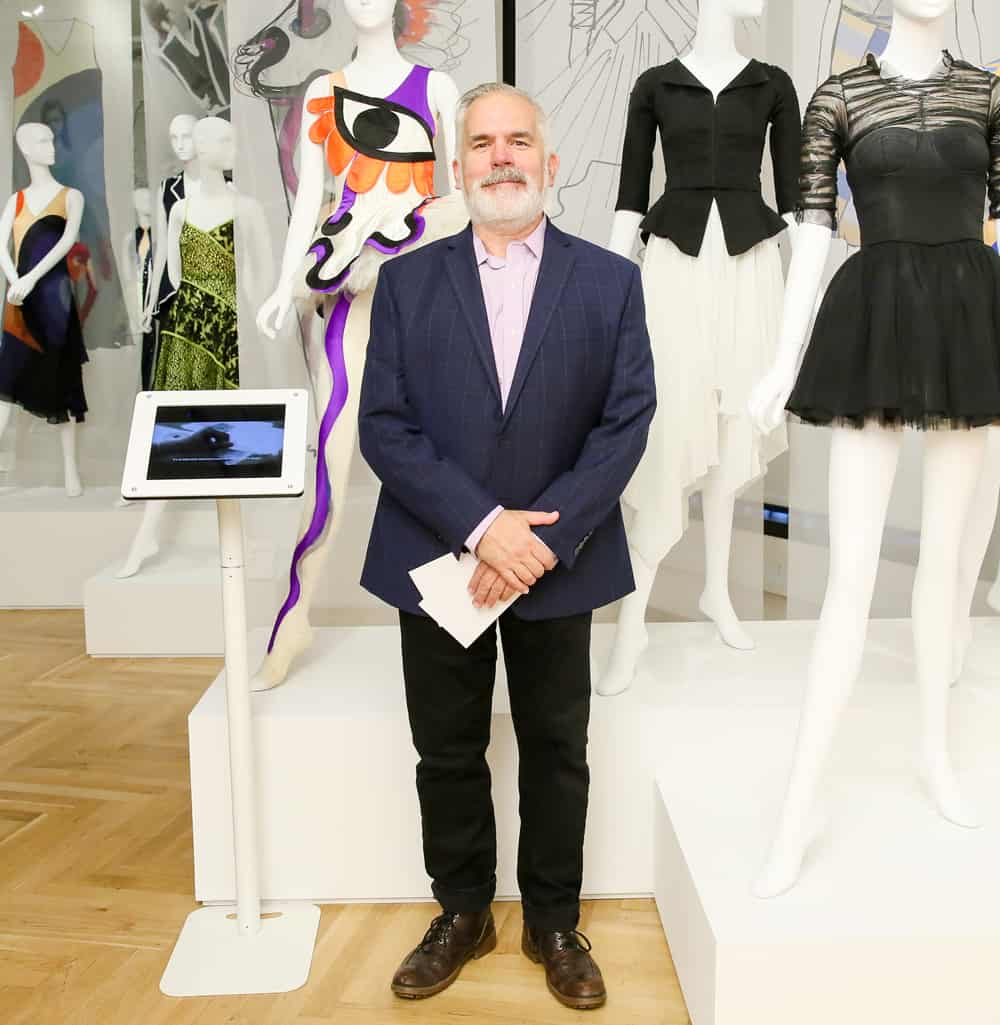 This program kicked off in 2012 with a big name…
The whole concept was it was supposed to be up-and-coming fashion designers. And then we started with Valentino! But he was great. He was amazing. He was so excited and on-board, and always there. Some of it he based on existing things from his couture lines. The one downstairs, for instance, is more or less a replica of a dress of his.

And then in 2013 Iris van Herpen did the plastic dress and boots, which I’ve since seen on display at the Museum at FIT.
The boot was something that Iris was very keen on, as was I. She loved the way it changed the body. I thought that was really exciting. It was met with some negative criticism, but I think it’s very effective, and I think it worked really well and really beautifully.

Have there ever been ideas pitched that were too difficult to achieve?
Not really. We pretty much found a way to make it all [work]. The Iris van Herpen clothes got on stage and suddenly everybody realized they made noise. There was this kind of crackling sound which no one thought was going to happen.

Over the music?
Kind of, yeah! And the choreographer…[at first] the boots drove him crazy but I was so into the boots, as was Iris. And the dancers really loved it, so they made it happen. But that was one of those things where they got on stage and they started the dress rehearsal and there was this crackling sound, and we were just like, “Oh!” But what do you do? Three days before… you don’t start over.

Tell us about the following year.
2014 was a very busy year! Thom Browne was super exciting to have around, and he was so in to it. He was really great because he was always there. Troy Schumacher, the choreographer, wanted this world of school children…

Perfect designer for school-inspired uniforms!
Yeah, I know! He said when he came to the first fitting, “I want them all to look like they’re wearing their older brother’s clothes.” And then we had Sarah Burton for Alexander McQueen, which was of course very exciting. She sent these samples of incredibly complicated embroidery. As always, I’m trying to find ways to do it that’s couture, that can last weeks and weeks and [look like] thousands and thousands of dollars. But we just don’t have that. So I found a company that does computer embroidery, and they did an amazing job of replicating it. You wouldn’t really believe that was all done on a computer.

When designers are coming in with these concepts how do you navigate what can and cannot be done in theater?
I have a hard time saying, “No.” I’ll usually try to find a way. That was a situation where we tried to find a way. Iris’ was another one. That was the first time we moved into the 21st century because we had a computer programmer figure out the pattern for us, put it on a thumb drive, and we printed it out. We’d never done that before. 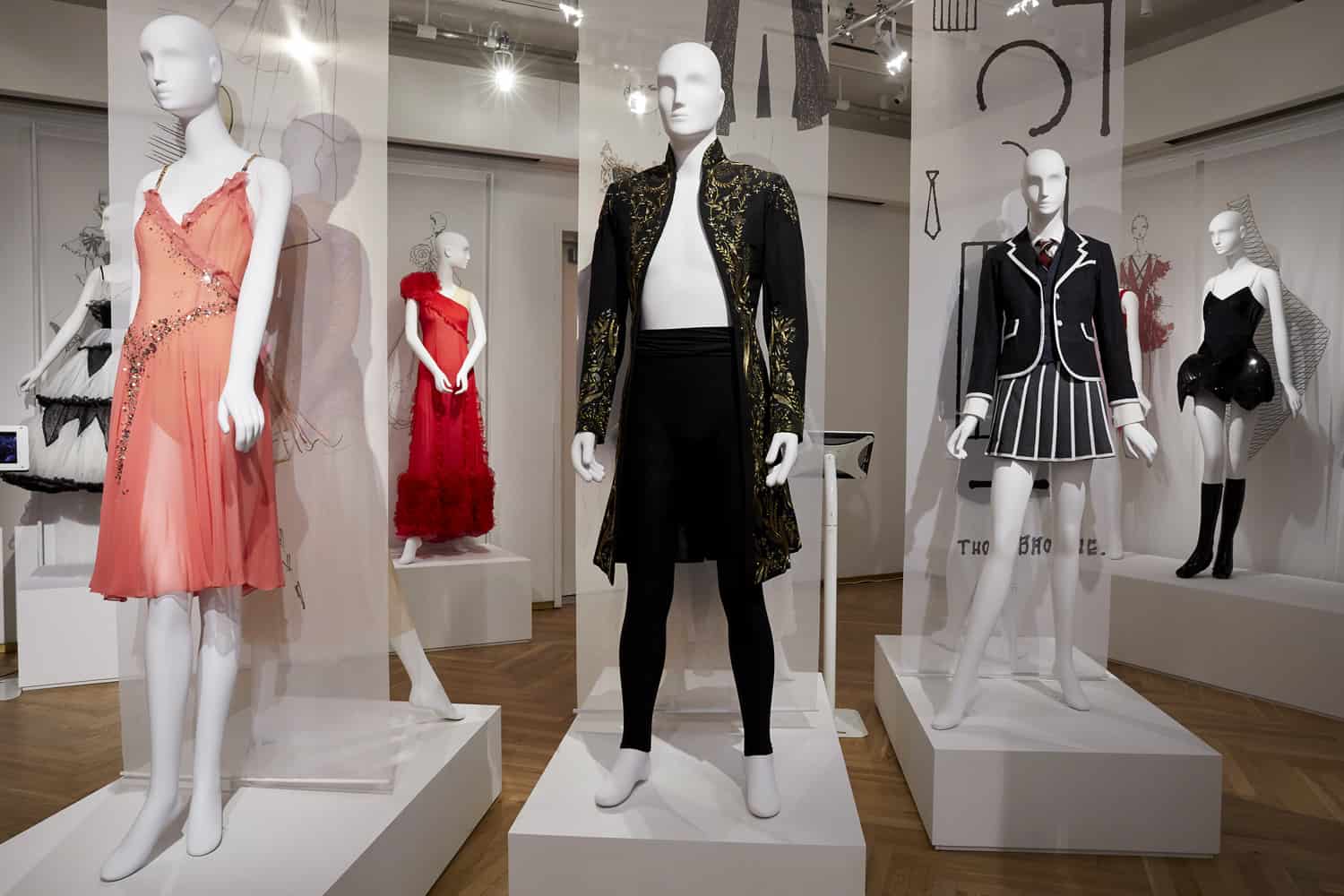 Do you ever get excited about the designers you work with?
In 2015, I got the amazing Dries van Noten, which was a high, high, high for me. Especially going to Antwerp and going to his studio, being there with him. It was just such a fashion high. He’s amazing. And he was totally into it, totally on-board. He sent over two big crates of their clothes from that season and he wanted us to put them on the two dancers and for me to take videos of them dancing in. Then he based it on that.

If you could work with any designer, who would be on your wish list?
It would be really interesting to have Alessandro Michele to come in. Miuccia Prada would be interesting. If we’re going to go big? Go big! There’s others…ThreeASFOUR would have been interesting too.

Which of the other designer collaborations stand out to you?
Giles Deacon—who did Kyle Abraham’s ballet—was one of the most exciting ones for me we had. It was really interesting how he created this total world like no other. It reminded me of a Kara Walker painting with silhouettes, because they were weird period silhouettes mixed together. And then there was this feather [neck-piece], which our dancer, Peter Walker, wore. I was like, “He’s never going to be able to wear that!” But we put it around his neck in a fitting and he was like, “I’m going to make this work!” And he did, brilliantly. You can see in the video that he really did an amazing job. 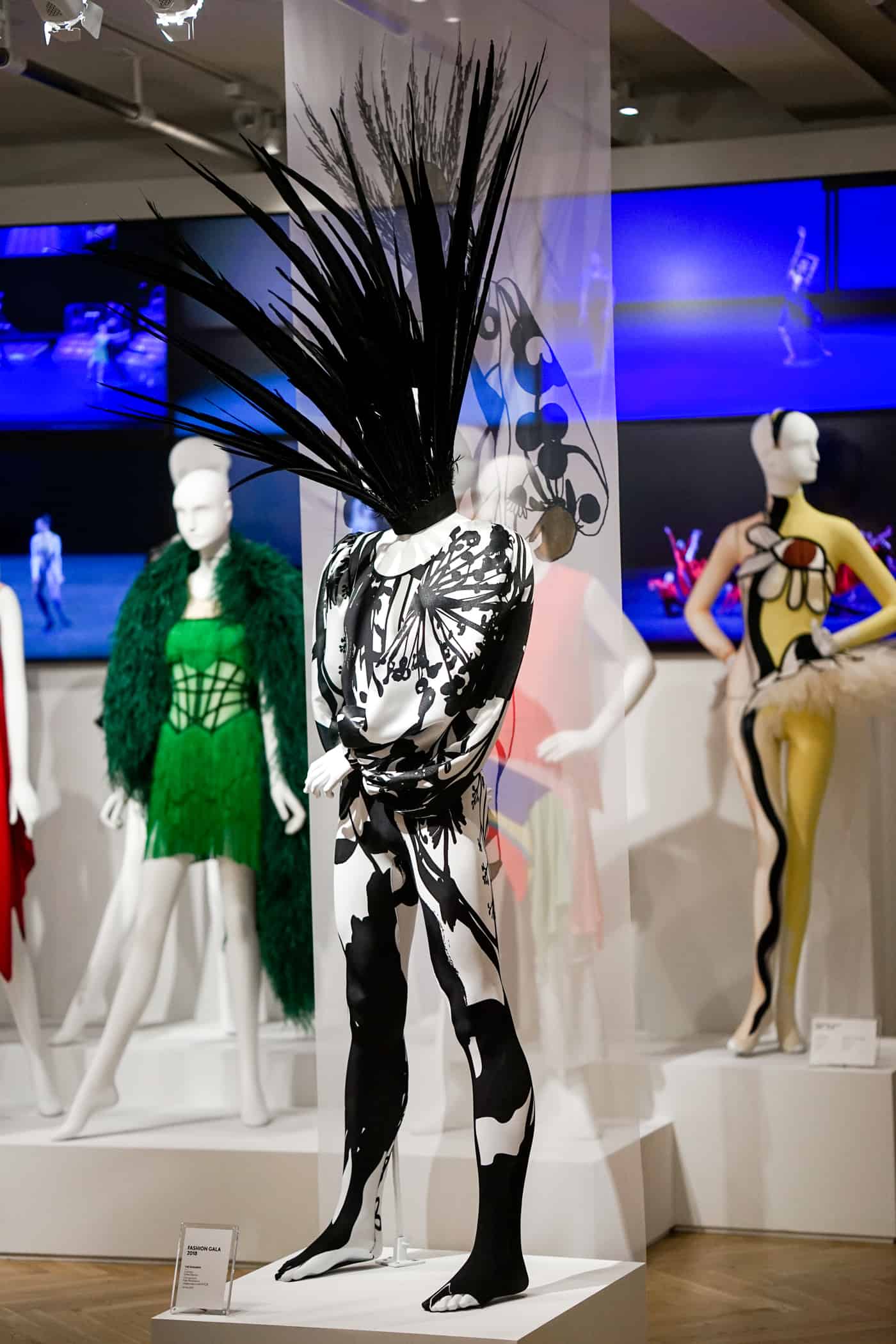 Have any of the other fashion-y elements posed as a challenge for dancers?
2018 was Gareth Pugh, which was all about blood, and black, and leather. These red face masks, which the choreographer loved and the dancers at first absolutely hated. But then they got used to them. The girls had a bit of trouble because of their eyelashes. They wear stage eyelashes because they took them off at one point. So that was a little bit of a struggle.

How do these designers get chosen?
In the beginning Sarah Jessica Parker made a list that I gave to the choreographers. Some were very keen on how to deal with it. Justin Peck is very connected to all worlds, so he tapped right in. Some are not so keen, so I would say, “Go to style.com or go to Vogue and look up their runway shows, look at the looks. When you see one that appeals to you, write their name down or put a check next to it.” They would come to me with two or three names and Sarah Jessica would put out an ask, and hopefully they would bite…most of the time they do. 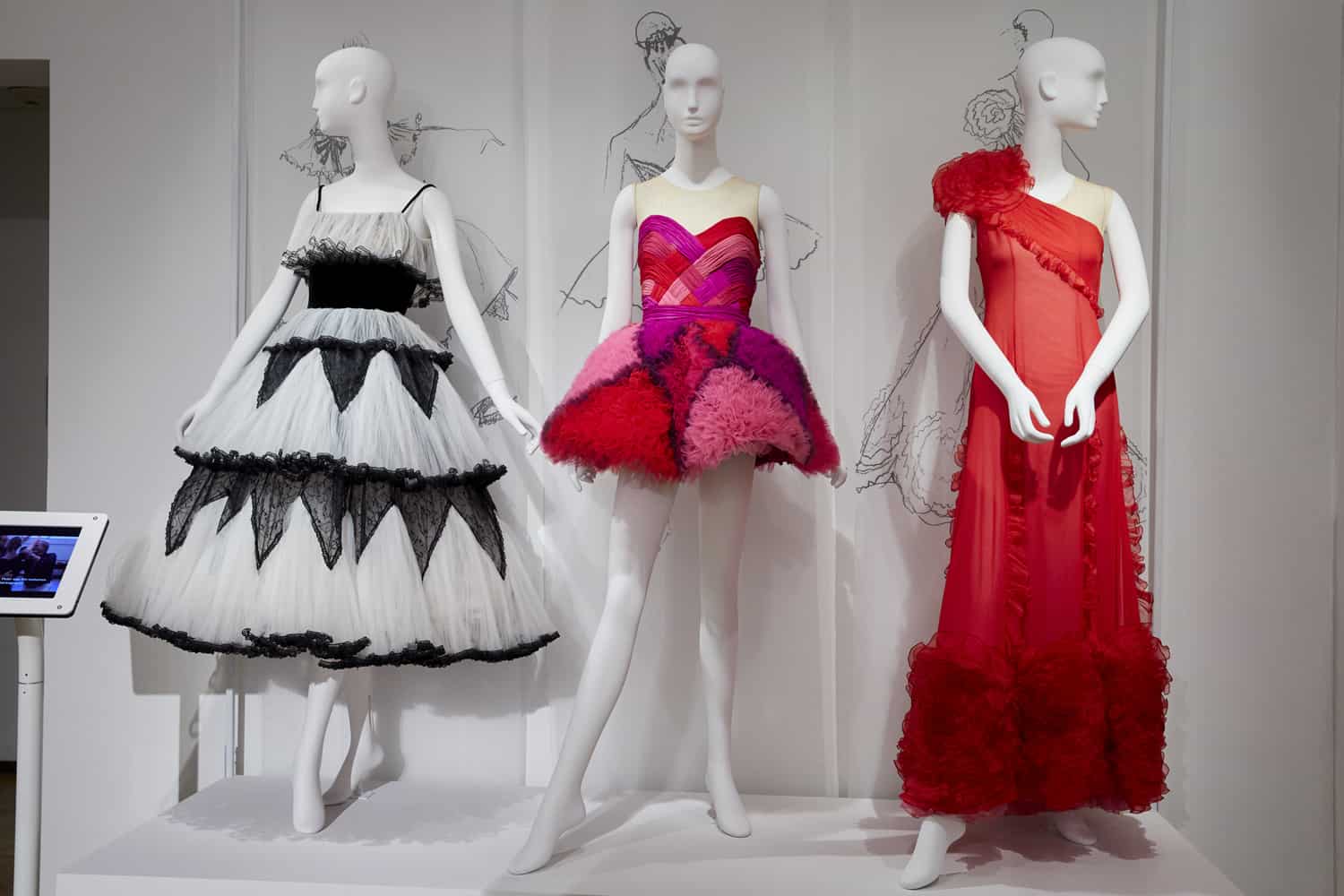 She’s gotten very busy so she’s handed it to me a little more. Our current one that we’re about to go in to is Zac Posen and Anna Sui, and they happen to both be friends of mine. I wanted to make it a really New York-centric gala. They both said yes right away. It’s smaller; it’s very New York. I thought it was very cool that way.

What is the process like when designers come in? How involved do they get?
Some are incredibly involved. Thom Browne was really involved. Valentino was incredibly involved. Some would like to be, but the issue we have is that our fall gala happens in September when [fashion week] is also happening. I often have their assistants pull me aside and say, “Ok, they are not available for these two weeks. You’re going to have to do it on your own.” It’s a lot of photographs sent back and forth with a lot of magic markers making alterations. FaceTime has become our friend for fittings. We manage to make it work.

I notice there aren’t any traditional tutus as one would expect for ballet…
The closest that ever happened was that for some reason Virgil Abloh wanted to do all the women in tutus, but his choreographer did not want tutus at all. She wanted the opposite of that. So we ended up with these little skirts. It was a compromise. 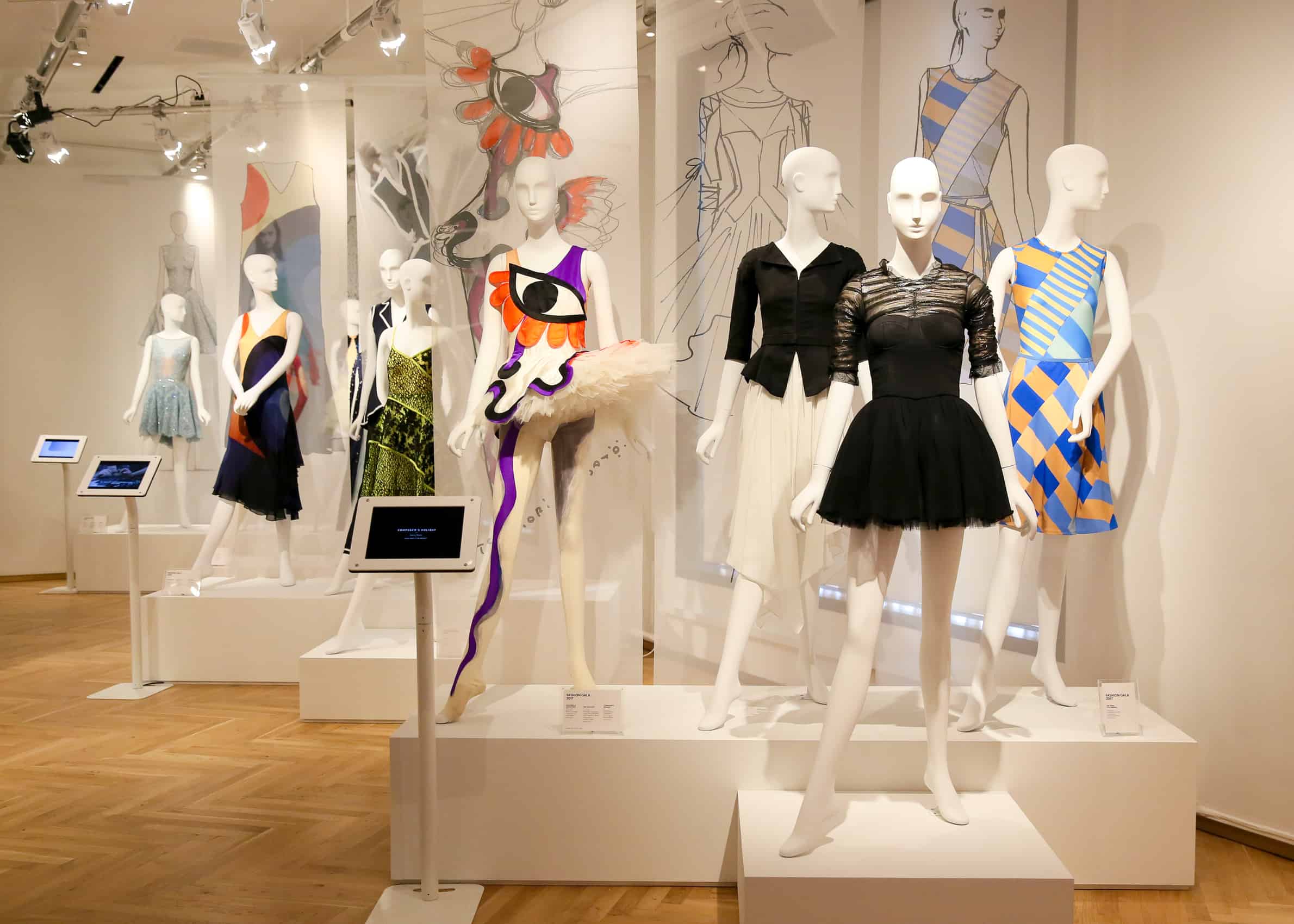 This year you’ll be designing too, yes?
We’re doing Symphony in C, which is a ballet that I re-designed. Peter Martins asked me to re-design a few years ago. Jonathan Stafford has decided for our gala we would do two new ballets and then a classic, which is great. So in this case it’s two new fashion design ballets, and then Symphony in C, which is a really stark, black and white tutu, really sparkly ballet.

Have you become friends with any of these designers like Valentino?
Yeah! Every so often he calls and checks in, or says he’s calling from the boat. And every time he does that I’m like, “Ok, it’s not a boat. I’ve seen pictures of it, it’s a ship.” I always get him to laugh at that. Then he tells me that the deck is so hot the puppy’s paws are burning and I’m just like, “Ok, you have way too much free time.” Iris I’ve stayed friends with. Giles I’ve stayed friends with.

What makes an effective costume?
A costume that a dancer has total mobility in, looks good on stage, and maybe adds a layer of story or character.

Design in Motion: A New York City Ballet Fall Fashion Gala Retrospective is on now at Intersect by Lexus — NYC. It is free to the public, and runs through October 20.

Spring is en route—and who better to...