Controversial designer Philipp Plein has issued a highly unusual statement asking Ferrari S.p.A to settle the $200K they are asking for in a pending lawsuit and instead he’ll donate the money to the Gianna Floyd Fund, a GoFund me for George Floyd’s 6-year-old daughter, Gianna.

Ferrari’s initial beef with the designer last summer was that he posted Ferrari cars on his Instagram and they threatened legal action. The Ferrari lawyers said, “Ferrari’s trademarks and model cars are associated in your pictures with a lifestyle totally inconsistent with Ferrari’s brand perception, in connection with performers making sexual innuendos and using Ferrari cars as props in a manner which is per se distasteful.”

This didn’t go over well with Plein who wrote on Instagram: “The CEO of FERRARI Louis C. Camilleri should think twice before he let his lawyers send a letter like this to a valuable costumer who bought 4 brand new Ferrari’s in the last 10 years !!! I am still speechless about the unprofessional and aggressive behavior of the company FERRARI towards his clients ! This is a clear BLACKMAIL !!!! I will not remove the pictures and I will start legal action against the company Ferrari for this unprofessional behavior ! I expect an official APOLOGY from MR. Louis C. Camilleri!”

Looks like that didn’t fly with Ferrari who pursued the suit.

“Since over two years FERRARI SPA pursued a legal battle against me asking for a monetary compensation. Initially they requested 2 million EURO and now, after a strenuous negotiation, we went down to 200k EURO. The reason why they are asking me such compensation it’s because I posted a picture of my personal Ferrari on my private Instagram account. In this particular moment full of tragic events all over the world I feel completely inappropriate to fight over such irrelevant matters. Neither FERRARI SPA nor me REALLY need those money. Instead of continuing this useless litigation I asked my lawyer to settle the fight in order to make a contribution of 200.000 US dollars to the “Official Gianna Floyd fund” which is for the benefit of the daughter of the late George Floyd or to the Black Lives Matter Fund. I truly hope that FERRARI SPA will agree on this action towards a cause I have at heart since always. I am suggesting this solution to support the black community and not to promote myself or my brand. I’ve been the first designer who held a fashion show with an entirely black casting back in 2013 during Milan Fashion week and over the years I worked with the most important black talents such as 50 cent, Snoop Dog, Naomi, Tyga and many more. We must take actions immediately instead of wasting time and energy in such an absurd useless fight, I officially ask FERRARI SPA to come together to make a difference. Said this, even if FERRARI SPA won’t agree with my request, I will still make a personal donation in order to support such an important cause.”

Today his lawyer, Carmine Rotondaro, released a letter to the public to Ferrari’s CEO requesting a proposed settlement. Part of the letter read: “It is the perception of Mr. Plein that, in these particularly tragic and divisive moments for our society continuing a legal battle over the pictures of some cars and clothes would be idle and tone deaf. He feels that instead of pursuing further appeals, Ferrari and Philipp Plein should better devote resources to supporting the communities which are most affected by the present dramatic social events.” The letter includes several other charities Plein could donate to besides the Gianna Floyd Fund with a $200K USD donation.

Here is the letter: 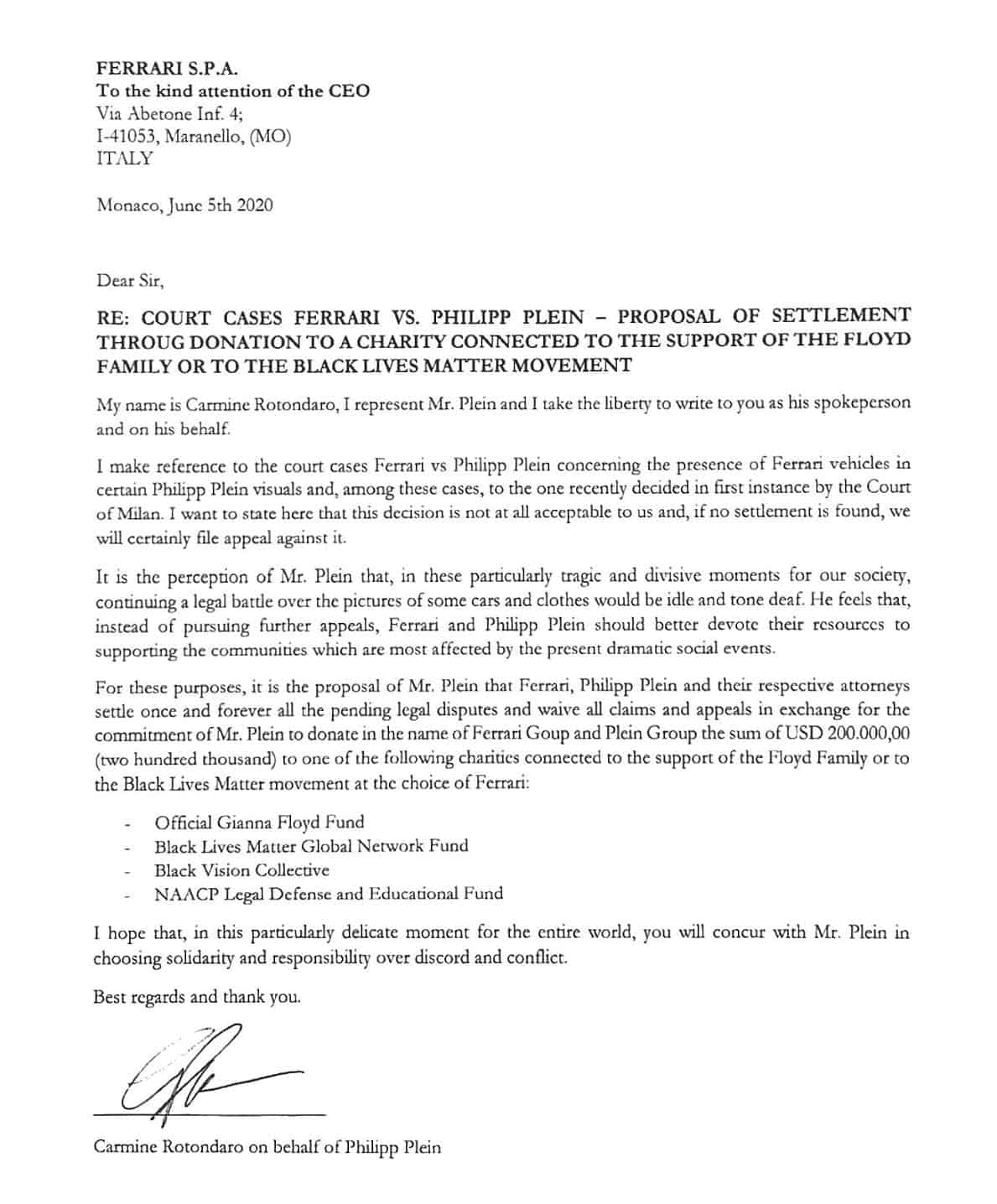 Plein came under fire during Milan Fashion Week in February when he concluded his show with a tribute to Kobe Bryant and the models wore bedazzled purple 24 jerseys with a set of  a number of gold-coated vehicles, including two helicopters. The designer claims the helicopters were planned before Bryant’s death, but critics online argued the show’s tribute sensationalized Bryant’s death.