By / Published on Thursday, 15 Jul 2021 04:04 AM / Comments Off on Sha’Carri Richardson’s experience hits home for Black women using cannabis for self-care / 17 views 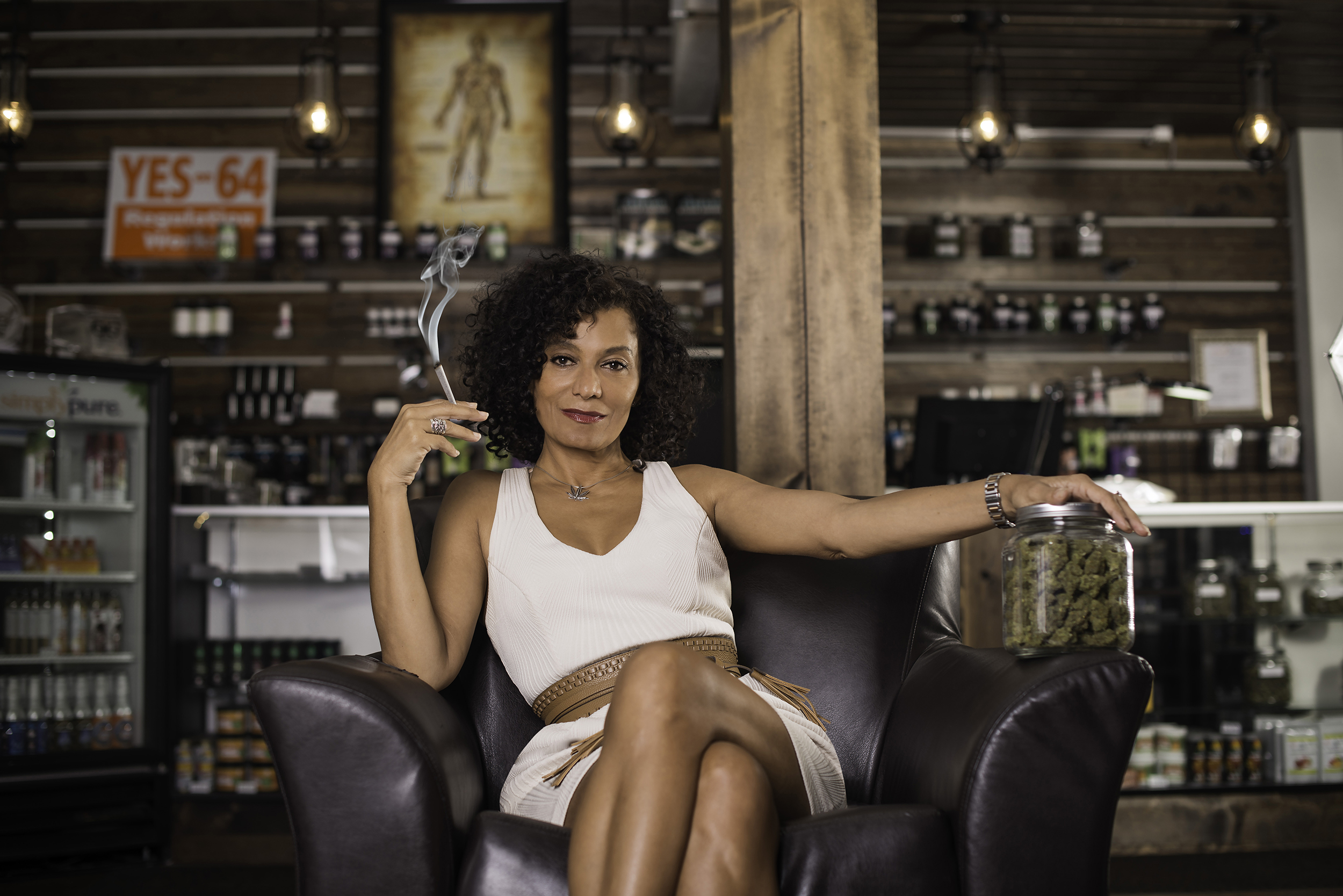 When Mary Pryor’s mother, 63-year-old Deborah Ann, was struggling with multiple sclerosis-induced pain in 2015, she turned to cannabis after morphine stopped being effective, her daughter said.

As a result, before she died, her mother’s pain drastically reduced, and “she was able to eat some of her favorite foods,” said Pryor, 39, who lives in New York.

That same year, Pryor — co-founder of Cannaclusive, a group that promotes inclusive representations of cannabis consumers — had started using cannabis to manage her Crohn’s disease after a slate of 20 different medications had left her both in pain and homebound for about a year, she said.

“When I was taking more aggressive pharmaceutical items, it made my system suffer more,” she said. Pryor felt like she had to choose between cannabis or “medication that makes my life miserable.”

When Pryor heard the news earlier this month that U.S. sprinter Sha’Carri Richardson would be barred from competing at the Tokyo Olympics after testing positive for THC, the chemical in marijuana, which Richardson said she used to cope with the death of her mother a week earlier, it “struck home for me,” Pryor said.

She’s not alone: Pryor is one of five Black women who told NBC News that they see Richardson’s removal from Team USA as the product of an enduring social stigma against cannabis, particularly against Black people, who are about 3.6 times more likely than white people to be arrested for marijuana possession despite similar usage rates, according to the American Civil Liberties Union.

But these women characterize the plant as a cornerstone of their self-care, particularly through the last year, when daily stressors were exacerbated by both the Covid-19 pandemic, which disproportionately impacted Black Americans, and high-profile incidents of police killings of Black people.

Richardson tested positive for THC based on a sample collected during the Olympic trials in June. The U.S. Anti-Doping Agency announced, based on the new rules by the World Anti-Doping Agency, that she would be banned from competition for one month, opening the door for her to be placed on a relay team during the later parts of the Olympics in Tokyo.

Richardson earned a shorter ban after completing “a counseling program regarding her use of cannabis.”

“I want to take responsibility for my actions,” she said on NBC’s “TODAY” show earlier this month. “I’m not looking for an excuse.”

“I would like to say to my fans and my family and my sponsorship, to the haters, too, I apologize,” she added. “As much as I’m disappointed, I know that when I step on that track, I don’t represent myself; I represent a community that has shown me great support, great love.”

The USADA’s decision would not have prevented Richardson from competing in the 4×100-meter relay at the Olympic Games, but USA Track & Field did not select her for a spot on that team, the governing body announced July 6.

In a statement, USA Track & Field noted it was “incredibly sympathetic toward Sha’Carri Richardson’s extenuating circumstances and strongly applaud her accountability,” but “our credibility … would be lost if rules were only enforced under certain circumstances.”

The governing body also acknowledged it “fully agrees that the merit of the World Anti-Doping Agency rules related to THC should be reevaluated.”

In an earlier statement, USA Track & Field said, “We will work with Sha’Carri to ensure she has ample resources to overcome any mental health challenges now and in the future.”

Marijuana is legal in Oregon, where the trials were held, but it is still illegal on a national scale. Senate Democrats plan to reveal a draft bill to decriminalize marijuana at the federal level.

A Gallup poll last year found that 68 percent of Americans support legalizing marijuana — the highest rate the polling agency has found since it first started measuring public opinion on the issue in 1969, when only 12 percent of the country supported it.

Cannabis as a way ‘to find center and calm’

Women are turning to cannabis in droves, constituting 59 percent of new cannabis users in 2020, according to research conducted by Brightfield Group, a cannabis market research company. It also found that 21 percent of female respondents used cannabis daily, and 81 percent of overall respondents said cannabis helped them deal with the stress of the pandemic.

For Black women, those stressors have been acute. And for Ebony Andersen and Whitney Beatty, cannabis was crucial to getting through the past year: Both have sons who were aware of — and anxious about — last summer’s uprisings in response to police brutality against Black people, leading the women to turn to the plant to manage the stress that came with talking to their boys about anti-Black racism.

“My son is biracial — having one Black parent and one white parent in the middle of what looked like war was very confusing to him. There was some self-medication that happened for sure, just to survive during that time,” Andersen, 49, said. “It was very much clear and apparent to me that we have to take our own health and our own well-being into our hands.”

Part of how Andersen and Beatty did that was by launching Josephine & Billie’s, a cannabis dispensary slated to open in Los Angeles in September. (California legalized recreational marijuana use in 2016, but arrests continued to disproportionately target Hispanic and Black people, who were, respectively, about twice and four times more likely than white Californians to be arrested for marijuana in 2019, according to the state’s arm of the National Organization for the Reform of Marijuana Laws.)

Aimed at educating women of color about how to use cannabis as a form of self-care, Josephine & Billie’s will host classes for mothers and older people, among others, about how to make cannabis work for them. They’ll also educate customers about how to use it in conjunction with meditation and other wellness practices, the duo said.

Both Beatty, Josephine & Billie’s chief executive officer and founder, and Andersen, its chief operating officer, came to use cannabis after the medical establishment failed them, they said: Beatty started using it after a doctor recommended she try it following an anxiety attack, and Andersen began using it to manage both her insomnia and migraines. Those experiences shape how they want to teach other women of color to use cannabis — especially in a society in which Black women, like Richardson, continue to be penalized for doing so.

“It is a radical act of resistance. It’s a radical act of taking back a plant that our ancestors cultivated and grew, to utilize the plant for self-care and recreational purposes,” Beatty, 42, said. “Sometimes it’s hard to find educational information that teaches you how to use cannabis specifically. We want to allow people to understand how to apply cannabis to their lives in a way that’s helpful and useful.”

Wanda James is driven by a similar mission, as the first Black woman legally licensed to sell cannabis in the country, she said. The owner of Denver-based dispensary Simply Pure, James, 57, is dedicated to combating the decades-old racialized stigma around cannabis — often by confronting it head-on.

“The way that I normalize cannabis is that I talk about it — when I’m around somebody who has an issue with it, I bring it up,” she said.

In Colorado, longstanding legalization means cannabis use is relatively normalized, James said: Voters approved a plan for medical marijuana in 2000, and recreational sales began in 2014. Black people make up less than 5 percent of the state’s population, but they have been disproportionately penalized for cannabis use, having been arrested on marijuana charges at nearly double the rate of white people in 2017, according to a 2018 state report.

These are among the inequities that drive James to turn to cannabis to find moments of peace.

“We live in a world where we need to find center and calm,” she said. “I believe, for me, that enjoying a joint is that five minutes [of calm]. … It’s calming, it’s relaxing, it helps you get your head together.”

For Jessamyn Stanley, cannabis is one half of how she finds calm. The other is yoga, and the two are inextricably linked as part of her wellness practice, she said.

“Cannabis really allows for a lot of patience and presence in a way that I think our lives in capitalist society don’t always allow for,” Stanley, 34, said. “In yoga, it allows you to really tap into your most true self, to connect your mind, body and spirit — so cannabis is really the cleansing agent within yourself so that you’re able to have that deeper internal conversation.”

Stanley — who shares her yoga practices and cannabis use with more than 467,000 Instagram followers — began posting about yoga in 2012 and went public with her cannabis use about six years later, she said. The initial reaction from followers was mixed, Stanley said.

“The stigma of what it means to be a cannabis user is so profound,” she said. “It’s something that, as a Black woman, I definitely am very aware of the way that I’m perceived by other people. … Black women are held to a standard that is completely different than the standard that others are held to.”

That double standard is part of what drove Stanley to co-found We Go High NC, a “cannabis justice organization” dedicated to destigmatizing and decriminalizing cannabis use in the state.

Stanley is one among many Black female cannabis users who see the double standard at play in Richardson’s case, she said. But, like James, she sees speaking out about the power of the plant as a personal form of resistance.

“I realized that the reason I never talked about cannabis is because of this stigma, and then I was like, ‘I am a part of the stigma — my silence in not speaking is my co-signature on the whole system,’” Stanley said.